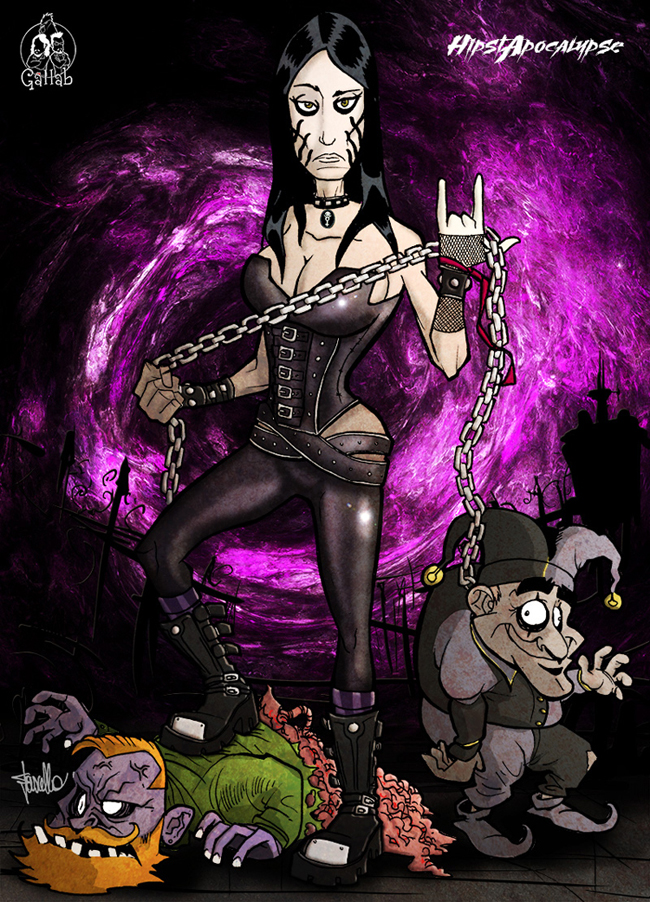 Cadaveria will be one of the main characters of HipstApocalypse game!
An epic adventure filled with tons of heavy metal references, set in the magical city of Turin, populated by hideous zombies. A must-play for all the metalheads, PC & Mac gamers, PS4 & Xbox addicted.
Here’s HipstApocalypse official statement:
Lucca Comics launch (Oct 28/Nov 1, 2016 – Lucca, Italy), Gallab LTD Stand
2025, June 30th, Turin.
Man, this hangover is killing me. Feels like Pantera and Slayer are merrily smashing my neurons. I’ve fallen straight in an apocalyptic scenario and zombies seem to be all over the place. Um, way too weird zombies, actually, as they are…Hipster Zombies! Naked ankles, cuffed pants and dirty beards! The cemetery I’ve just woken up in is as chilling as the cover in Master of Puppets. As deft as a concrete mixer I run away to find a shelter, survive, grab myself a beer and to kill ‘em all! Seek and Destroy!
Set in an apocalyptic Turin, in which people have been turned into hideous Hipster Zombies, HipstApocalypse is a really peculiar epic adventure. This game is a tribute to metal icons: its main character has been clearly inspired by Lemmy Kilmister, while the sets are a mashup of essential records that will make every head banger’s eyes twinkle with delight. The ironic storytelling and the dialogues recall some LucasArts projects, such as Monkey Island, Grim Fandango and more.
Cadaveria will be the second main character of the game. The Lady of Shadows will interact with the esoteric and mysterious part of the city, massively contributing to the plot.
Arm yourself with mosh, head banging and studs to solve the mystery behind HipstApocalypse!
HipstApocalypse is a pilot project by Gallab LTD, an indie game development company based in London. The concept art by Mirko Fascella gives the character design a personal, signature style. The soundtrack is made of original songs played by Italian underground bands.