CADAVERIA’s first album remastered. To be reissued on July 16th 2013 with new artwork.

Black Tears is proud to announce they have reached an agreement with theband CADAVERIA for the reissue of “The Shadows’ Madame” album. Released in2002, the cult album that marked the beginning of CADAVERIA career, hasbecome extremely rare by now. So it’s time to make it available again to allfans. This new issue, proposed with a brand new layout, is completelyremastered and it contains songs such as “Spell” and “Circle of EternalBecoming” that have become classic hits of the band. 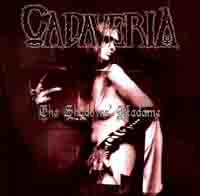 The release of “The Shadows’ Madame” reissue is scheduled for July 16th, 2013 and it will be distributed by Black Tears Mailorder and Masterpiece Distribution.
Tracklist:
01. Spell
02. Declaration of Spiritual Independence
03. In Memory of Shadows’ Madame
04. Circle of Eternal Becoming
05. The Magic Rebirth
06. Black Glory
07. Absolute Vacuum

Murder Made God - Throne of Derision