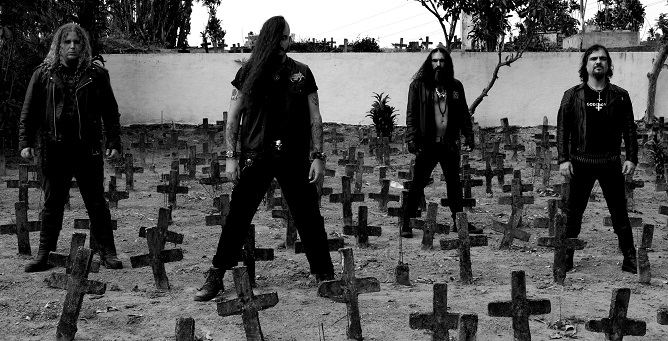 Coldblood was forged in the underworld of Rio de Janeiro with the intention to make a sound based on the roots of Death Metal and to preach Satanic Doctrine. The first demo tape, “Terror Stench”, released in 1992, made the band one of the most important bands of the style in the early 90s. After a long pause due to internal problems, they got back together in 2000. Prior to that, they have released some startling death metal releases, including two full lengths. The band has shared stage with big names of the international scene, such as Mayhem, Master, Onslaught, Cannibal Corpse, Benediction, Asphyx, Funerus, Krisiun, Nervo Chaos etc.  Apart from having national tours, the band undertook South American tours as well.
Right now the band is preparing the release of their third full length called “Indescribable Physiognomy of the Devil”. The album, which was recorded in Brazil and mixed and mastered in Germany, has 10 new songs showing Coldblood with its feet even more nailed in the roots of the 90s Death Metal, but also adding its own identity in compositions that will surprise the listeners thirsty for an obscure, chaotic and traditional Death Metal. Menacing vocal deliveries, pounding drum hammerings, sharp and thick bass lines, and continuous neck wrecking riffs together with the fiendish, transitory solos will make any death metal fans go insane.
The album will be co-released by Satanath Records & Metallic Media (USA)
Coldblood’s official Fb Page
Satanath Records

WARFATHER has released the artwork and track listing for forthcoming sophomore album The Grey Eminence.