Southern California’s BLEEDING THROUGH track entitled “Breathing In The Wrath” is available for streaming at the band’s MySpace page. The song will appear on the group’s forthcoming self-titled album, which is scheduled for release on April 13 via the Portland, Oregon-based independent record label Rise Records. The CD was recorded at Planet Z Studios in Hadley, Massachusetts with producer Chris “Zeuss” Harris, who has previously worked with MUNICIPAL WASTE, AGNOSTIC FRONT and HATEBREED, among others. 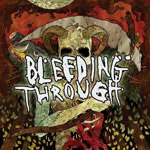