You gotta hand it to these bedroom black metal solo projects; they’re such terse bastards. Calling them men of few words also fits. Even the most insightful questions merit no less than a few dozen words in reply. But that’s why they’re so lovable, right? (And hilarious.) The thing with Mr. Black Spell here is, unlike his peers in the European continent, he’s Syrian. Yes, Middle Eastern, authoritarian, conservative, Syria. Contrasting his location, this dude goes about his music in the grand tradition of Bathory and Burzum. There’s a demo of his out as well. Here, let him do the explaining.

Hello BlackSpell! So uh, by what name should I call you?
Mr. Black Spell: Hello, you can call me Demon.

Alright, we got that awkward part out of the way. Didn’t you just release a demo? Tell me, how long did it take to conceptualize, write, and record the songs?
Demon: It took me four days to get done.

You executed everything at home, right? What kind of hardware did you use?
Demon: I used my Phil pro guitar; four-string Echo bass; 20 watt Snow Sea amp; Zoom G1X multi effects; and some pc soft ware. But I also bought some new hardware (an ESP guitar and a Marshall amp) to get a much better sound on my next albums.

Do you consider yourself a serious multi-instrumentalist or are you content to keep your musicianship at very primitive levels?
Demon: Yes, I do.

Your music is arcane and anti-religious. No surprise there. Do you read history to supplement your music? As far as I know pre-Islamic Syria was fully Christianized around the time of the Byzantines. Where do you draw ideas from?
Demon: I draw my ideas from my mind, soul, and heart. As I see it religion doesn’t have anything to do with music 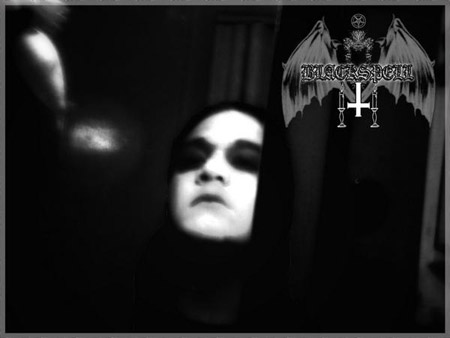 I assume you’re bilingual, fluent in English and Arabic? Do you write songs in both languages or just one? Will you ever incorporate Islamic/Middle Eastern culture into your sound the same way other extreme metal bands in Europe have (i.e. Behemoth)?
Demon: I only write songs in English because writing them in Arabic is difficult and I think I’ve developed my own black metal style.

Do you stay true to the old school pioneers like Venom, Bathory, and Merciful Fate, or do you constantly broaden your tastes with new stuff?
Demon: I’m a fan of every true black metal band. While I consider Bathory and Venom the Gods of Black Metal, but there are many, many, good bands in the second wave of Black Metal as well.

Is there actually a metal scene in Syria or are you a one-man crusade?
Demon: There are many great bands down here, including Nuclear Dawn, who’ve become famous throughout the world. There are also two great death metal bands worth checking out, Obia and Absenition.

By the way, which part of the country do you live in? What’s life like down there? You have Jewish neighbors? How about Iraqi refugees? Jordanian tourists?
Demon: Sorry, but I don’t want anything to do with politics.

I suspect you have a wicked collection of obscure demos and EPs at home plus a closet full of leather apparel and chains. If the authorities in your country ever found out about this, would you be arrested?
Demon: I think I wouldn’t be since the police here are only aware of satanic cult.

Since you’re a bedroom project, there aren’t any plans to perform your music, right?
Demon: Nothing definite at the moment, but there are plans to do a couple of summer concerts next year.

Do you listen to anything else besides raw black metal? How about good ole thrash like Megadeth or Anthrax?
Demon: I listen to Black, Death, and Thrash Metal. (I’m a HUGE Slayer fan.)

Do you have any long-term plans for a full-length release sometime in the future? Will it carry on the sound of your demo or will new elements—like ambience and such—be included into the mix?
Demon: Yes, I do. I’m trying to play all the kinds of black metal (raw, melodic, ambient) and sometimes mix differing elements in one song

So uh, suppose I drop by Syria. Are there any nice places I can check out. I know Damascus is probably the oldest city on earth, so that would something. What do you suggest?
Demon: I suggest you go see Old Damascus.

I guess we have to wrap this up. You want to leave a message for your legions of followers? By the way, you ever fantasize about setting up an immense live act full of flames, inverted crucifixes, mechanical dragons, giant amps, and semi nude chicks in leather?
Demon: The only thing to do that’s right is what you have in your mind.

GRAVEYARD ''Into the Mausoleum''