Jordanian Dark Oriental metallers BILOCATE have inked a deal with the Italian label Code666 (Aural Music) to release their third studio album “Summoning the Bygones”. The album was mixed and mastered at Fascination Street Studio in Sweden with producer Jens Bogren (OPETH, KATATONIA, BLOODBATH, AMON AMARTH, SYMPHONY X, PARADISE LOST).
“Summoning The Bygones” artwork and promo track will be announced soon. Video footage from the studio diary can be seen below:
BILOCATE’s bassist Hani Al Abbadi commented on the deal: ”Its an honor to join Code666 roster and a step forward in BILOCATE’s musical career, ‘Summoning the Bygones’ has the most intense and best material we’ve done so far. We are pleased to release it with a sub-label of one of the biggest musical companies in Italy – Aural Music”.
“’Summoning The Bygones’ is an old vision with a totally new arrangement, we took the tracks and rewrote many parts of their music and lyrics from scratch but kept the old spirit that everyone enjoyed in ‘Dysphoria’, the album will remind our fans of what we’ve given them before but they will surly feel the change… it has many passages and will carry you into a heavy, fast, dark oriental Metal journey”, commented vocalist Ramzi Essayed.
Added Code666 label manager Emi: “Having been a personal long-time fan of the band, there was no way we would let this chance slip past us to sign them for the new album. As a label we haven’t signed many Oriental Metal, but in BILOCATE we have found a high quality addition to our roster and are looking forward to working with the entire BILOCATE team in the future!”.
The album also includes a fully modified version of “Days Of Joy” under a new name “Hypia” (which is actually the very first name this song had originally when it was composed in 2003), in addition to a brand new song and a cover of “Dead Emotion” from one of the legends in Doom/Gothic Metal PARADISE LOST taken from their legendary album “Gothic” rearranged totally in BILOCATE style, it’s a way of celebrating 20 years from the release of this amazing record that created a whole new Metal genre.
The tracks ‘Hypia’ and the legendary 20-minute track ‘A Desire To Leave’ features the Metal icon Dan Swano as a guest vocalist.
Tracklist: 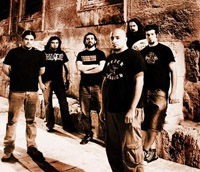