"Hi Andres,how is it going ,is there anything new with Bestia nowadays?"
Hi there! Our split disc with Urt was just released and now we are working on songs for second full length album. The bad news are that there are only 2 members in band at the moment, but as i have been always main power behind this, it doesnt stop the band at all.

Firstly I want to talk about the difficulties your band went through at your first days, you changed many members but you were a known band in estonia with concerts and 2 promo cd’s, were you waiting for such a success in 2002 ?
I always look for musicians who are not involved in other bands, maybe its mistake i dont know really. Time by time they discover real interests and leave us, or get kicked out because of laziness, hehe. Thing what you call success are just result of hard work. There are many things what could be done better, but i dont regret anything. 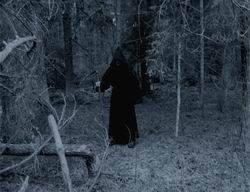 After that success your debut album "hallutsinatsioon" was released by the famous german company perverted taste, did they Offer you or like any other band you send your promos, how did the deal happen ?
I sent quite many promos to various companies and some of them promised to release our album, but they were not very serious about that. Perverted Taste found us somehow, i didnt send them promo, maybe they got it in other way. Thanks to them, our album is available worldwide, i’ve seen it in many distros in many countries.

As known Perverted Taste is a quite big company, because of them bestia is now known in many countries but i, personally came across your band in 2002 in a website named mp3.com. do you think that you grew faster by internet ?
Internet is great and cheap opportunity to promote your band. On the other hand that chance is used by very big number of bands, so you have to use your imagination to make great presentation of your band, or even to use help of professional designers etc. Its not very useful to put online some uninteresting blabla and ugly pictures, people just leave your page very fast.

I’ll ask a question based on your website info, every member in the band has a different taste in music, what is good and band for bestia about that ?
Having a band members who have different musical tastes is good on the one side that it adds more variety to music. But it can be fatal, because somebody can leave, especially when music is quite brutal and he likes more melodic stuff. Lineup has been always problem of Bestia, its not easy to find people who are skilled musicians and like exactly same sounds and ideas.

At first times you had a "rawer" sound but by time you got melodic and different, but your last demo is different again, can you call your band in a genre ?
On our first album we used keyboards, but now they are dropped and thats the reason why music sounds more raw again. I always enjoyed to put some different elements into songs, so staying in certain genre is really not what i’m trying to do. 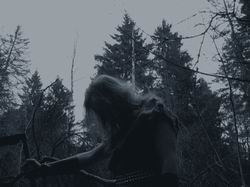 You sing in your own language, does that have a special reason when we search in the net we can find them also in english, and in your booklet they are written with rune alphabet, what are the reasons behind this ?
I feel that singing in our mother tongue in case of Bestia is right thing to do. It seems right and sounds right to me. As i’m now in duties of singer and i write most of lyrics too, the “ideological” side has became more important to me. I’ve been told that we cant make international career with non-english songs. But i dont care really about becoming international rock star, because our music is not made for eveybodies taste anyway. I’ll be pleased if it reaches right people and leaves mark in their souls, no need for thousands and thousands copies.
I always provide english lyrics too, to make it understandable for metal people from other countries.
In booklet of “Õiglaste tulek” i didnt wanted to use standard computer fonts so i hand write all texts. Its not real rune alphabet, its usual letters in rune style, as most of people dont understand rune alphabet.

Is that because of a non-racist patriotism or anti-christ pagan beliefs ?
Well i think that every person have to know and respect their roots and culture. It’s bullshit that todays massmedia has made word “patriot” of synonym to racist, nazi, fascist or whatever. I think that it is possible to be patriot without being racist and vice versa. Its not bad to be patriot.
Pagan believes are came from much earlier time than christian religion, so i think that christians are more anti-paganists than pagans anti-christians, hehe. Even in modern times like now, christians continue to discriminate pagan believers with power of money and manipulation with opinions of “regular” people.

Your lyrics are mostly based on mythology and nature, do you think that your band should be named black metal or can we say that you just have black metal influences ?
Well musically it is kind of black metal, but ideologically not. Calling it simply pagan metal, will got give good description of musical side. So i think definition pagan black metal or pagan black/death metal is the best solution. If somebody has better ideas, please tell me.

You played with bands such as skyforger, let me dream, archgoat, enochian crescent, who impressed you most ?
I dont remember much about Let Me Dream as this gig was many years ago, only that they sounded more brutal than on cd. Skyforger and Enochian Crescent are great on stage and they are interesting people too, who put many energy and resources into their bands.

You have special performances and shows at your concerts, can you tell me a strange memory about these ?
The most extreme gig was our first one, when i had to borrow cables and stuff from other bar.
We have played 41 gigs so far and i cant remember anything what could be called strange, but it was all fun. Now there are only two of us in band and seems like there will be no gigs in near future. But i wait time when we can do some brutal shows again with full force. 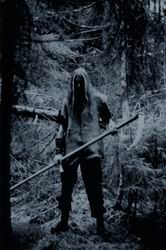 Where did you play besides estonia, where was the most impressive one and did you ever go through times that you wish that had never happened ?
We have played some gigs at our neighbours, Finland and Lithuania. Best memories are from Lithuania, as people were really friendly with us. Last time we played at open air festival Kilkim Zaibu and i personally enjoyed that event very much.
Finland was ok too actually, but there is kind of different situation, as they have many gigs over there and we were just another band for them. More promotion is needed to this direction, is the keyword.

You were supposed to support Dark Funeral but this didn’t happen, what was wrong ?
Their equipment was confiscated by police in Peru, a week or two before that concert. So they had to cancel both gigs in Baltic countries.

I want to end with a few personal questions and the future plans of bestia, you played in a doom band named pluribus impar, what went wrong with that band and why did it split up ?
They were without drummer so i decided to help them as friend and it went this way that i stayed for some years. It was all totally amateurish and after some trying we split up silently, as everybody had different interests and we just didnt had time for this. When i decided to start my own band, the end was soon to come. We still are in good relationship and PI singer has written some texts for Bestia and guitarist has helped us at recording session.

Are you still thinking about playing drums or is it left behİnd, i must say that you are very talented, if a problem occurs in the future with bestia do you think about a solo project ?
Well seems like Bestia is kind of my solo project, where other people help me to realize my ideas, because its kind of hard play concerts alone hehehe..
I really enjoy playing of drums, sometimes i still practice in our rehearsal room. Its really useful, as i can explain or show to our drummer how to play certain part in song if he is confused. But it needs more time and dedication, to became good drummer. I dont think that i’ll ever play drums full time in serious band, but who knows.

I think you will release a split with URT, can you tell us anything about that?
Split has been out for a two weeks and first people already got their copies. It was just random idea, but we thought its very cool to record split, with one original track from both bands and cover songs of each other. There are also bonus video clips to show how we look on stage.
This disc is limited to #333 handnumbered copies and comes in black-gold printed box. 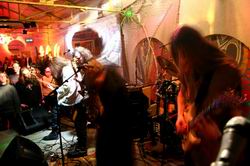 Let’s talk about your distro hexenreich, how did you start and how is it going now ?
I started it with releasing one compilation of local extreme metal bands, because no compilations were made for some years and i wanted to fix that situation. Then came trades with other labels and more and more releases. It was kind of logical progress, since that i’ve met interesting people from international metal scene (many assholes too). I have wet dream to release original cd on one day, but guess it will never happen as i dont want this business to grow too big. It’s a shame that local scene dont support my label much, but i receive quite many orders from other countries as i keep prices low as possible.

Final question, i want you to tell us about estonian metal scene briefly, and do you have a message for our readers ?
Well what i can say, we have active metal scene over here and bands are discovering world step by step. Here are great places to rehearse, play gigs and record music, so bands have quite good opportunities to progress at the moment.
We have various bands of different styles, good and shitty ones too, all info can be seen at www.estonianmetal.com its site maintained by bands.
Support underground!

Thanks for your time and answers….
Thank you too for this little chat