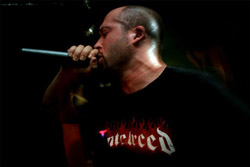 Hi! What`s up in France? Have you a first days of spring like in Poland?:) What about the reactions for your new album?
Truch: Hé hé! Everything’s fine here! The album is available for 2 weeks now and the returns so far are amazing! TheReviews, fan’s reactions, demands for gigs or festival are great and we’re impatient to start touring for its promotion! We’re so proud of our new baby "Asylum Cave"!

First of all, why we had to wait for your new album for so long? 4 years is a quite long time!:)
It’s at first because we have played a lot for our last album "Icon", between tours and great festivals like Summer Breeze, Inferno Fest, Hell Fest, Neurotic Deathfest, Obscene Extreme or Metal Fest Open Air. Also the returns for this album were so good that we decided to pay attention to record an album that would push everything farer and show people we did not intent to stop there! 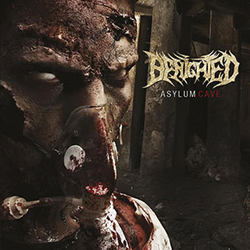 Can you briefly explain the songwriting process for the newest album "Asylum Cave"?
We wrote our new tracks in a very instinctive way as usual, with our rage of the moment and including the ideas and influences of each member to make it sound like Benighted. In rehearsal one of us comes with some riffs and the idea of a track and we work all together for the structure, arrangements, breaks… We had no other purpose than writing a killer album mixing brutality and groovy and giving the listener the need to break his neck!

Were there any differences in the recording process for this particular album?
No, the only difference was inside of us, our evolution as musician, human and deranged people! Hé hé! Our methods have been the same than before.

Your music is a great mix of death/grind and hardcore influences. What determines the proportions of this style in your music? What do you do that your albums are so consistent?
Thank you, I think we know ourselves quite well and it’s very easy to work together knowing what the others have in mind. We don’t plan anything before writing a new song, sometimes the result is very far from the idea we had first! However we always keep in mind to make it effective and surprising because we don’t like to play always the same thing. Each song has to keep its own-identity and be easily recognizable from another. The new album has this more “Grindcore touch” mostly because of our drummer who’s got a feeling very close from this style in my opinion. And it makes Benighted music more violent and rich than ever

What track are you most proud of on "Asylum Cave" and why?
I would say “Let The Blood Spill Between My Borken Teeth” because I feel so much energy and rage when I sing it, especially from the vocals break in the beginning that I love to do! 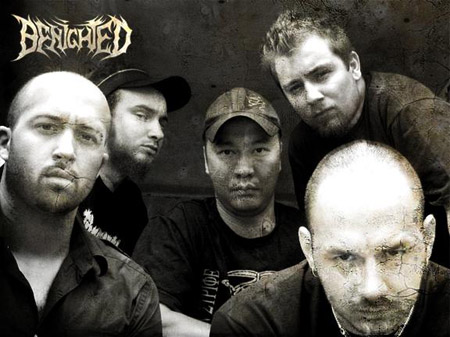 How did you cooperate with Svencho (Aborted) and Mike Majewski (Devourment) with guest appearance on this album?
Sven is a very good friend for years now and it was quite natural to invite him as guest-vocalist for the track “Unborn Infected Children”. This man is an amazing frontman and we are proud to have him on the new album! Concerning Mike, I’m in contact with him since our “Identisick” album, as we usually share our albums. I’m an absolute fan of Devourment and when I asked him to make some vocals for “A Quiet Day”, he told me he would be very honored to do that! When I received his vocals files, I was very impressed, this man is not human! He he! Their participation on the album is according to the insane and varied styles of voices which underlines the schizophrenia of Benighted! 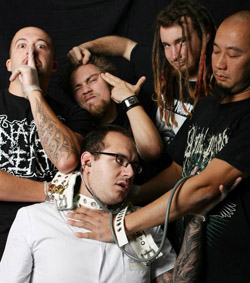 Why only french fans can hear your French fans cover of NASUM’s "Wrath" as bonus track?
It’s only because Season Of Mist wanted to make a special edition for France where we’ve got a big fan-base and we chose to include some bonus stuff. We recorded this cover song in the studio with Asylum Cave and it fitted perfectly with a special edition. We are very big fans of Nasum.

Let’s talk about the lyrics. Could you tell me what is the most important thing to do a good lyric in your case?
As there’s always a difference between reality and psychosis, each song has to include several meanings. The first reading hides lots of things about psychiatric diseases like symptoms of the man for example. And I’m totally satisfied when all the songs of an album fit perfectly together to tell a single story. And there, it’s about a schizophrenic whose delirium is about his cave and the Fritzl Case.

I know, Julien, you work in psychiatric hospital and part of your lyrics are inspirated by this activity. What was the most crazy and unpredictible thing that you experienced in your profession?
Except from physical aggressions, I remember a day when an old patient came to the office, he just cut his wrists and a superficial part of his throat, it was quite bloody… However the psychotic patients with intense deliriums are very interesting and you can’t imagine all the things I hear and see…

What was the main reason that you decided for working in this place? And what are the negative and positive sides of that?
I just decided that because it was a new place, my colleagues and I had to organize our own-work and it was a fantastic experience! The most positive thing is all I learnt about mind and unconscious work to protect itself. You learn a lot about yourself and it’s great to help people in so unspeakable distress. The negative sides are violence and stress you have to always stay watchful and concentrated. 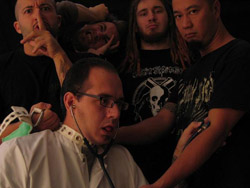 What do you think, have your specific profession any influence on your personal psycho? Are you sometimes tired because of working with difficult people?
I have the luck to know me quite well, I know where my strong and weak points are and I can handle that without problem. But it’s often exhausting for the reasons I told you just before.

I know you spend a lot of time for your lyrics. Could you tell me how do you begin to work at a new lyrics and on what you put the weight the most?
First I think about a general concept, I write some stuff about a story, study the pathology I want to include in the album and think about the experience I have with similar ill people. Then I decide the theme for each song and when I definitely know what will be my vocals parts, I write the final lyrics. The big point is that the links between the songs must be clear and make from a broken puzzle a perfect picture of mental illness.

Have you a situation that you think your particular lyric is too bad to publicate and you resign from that?
No, I don’t remember such a situation… 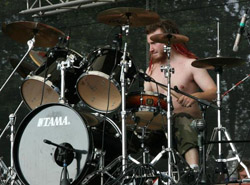 Your drummer plays in Disavowed too, right? What is the status of this band now? What about sharing time by him between two bands?
Absolutely, but there’s no problem! Kevin is an awesome drummer and he often helps bands on tour when their drummer is not available too. I think about Nervecell, Nightmare, Sabaton… So far we never had problem of organization with Disavowed, and we respect this band a lot, they are amazing!

Could you tell us more about your musical influences besides "extreme" music? What are some of your guiltiest pleasures that one wouldn’t expect to see on your mp3 player? 🙂
The only music I listen except from metal is classical music so I’d say Mozart.

How about your families, are they supportive of what you are doing?
Absolutely, my girlfriend is very understanding and supports me a lot. My biggest fan stays my daughter who is 4 years old and who already starts to growl! (laughts) 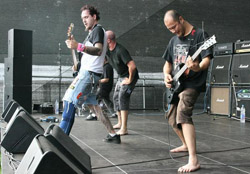 What about a political climate in France? What about the society reaction for a catastrophy in Japan? I know that 80% of electricity in France in depended from atomic power stations, so you have a very developed this type of making electricity. Did you noticed any type of concern in french society because of big threatening during the natural disasters?
It’s shitty everywhere there, not only because of the Japan catastrophic stuff but also because of the wars in Arabian countries. Everything concerning energy becomes very expensive these times and the much more terrible things than oil inflation are not close to stop as we can see…

What’s the Benighted plan to do in the future? Touring Soon? Where and with who?
Right now I prepare myself for our French tour which starts tonight! Ten days of brutality and fun with our friends Kronos and Gorod! It will be amazing! After that we’ve got some big festivals like Summer Breeze or Neurotic Death Fest, and we hope to be on tour in Europe as support of a big band in autumn but I can’t tell you who right now.

Thanx for your time! Any final words for our readers?
Thank you for your support! Discover Asylum Cave and see you on tour to show you what Benigthed is capable of on stage! Stay sick!!