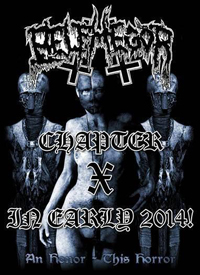 Austrian death/ black metal metallers BELPHEGOR have pushed back the release date of their new album to early 2014 via Nuclear Blast Records. The follow-up to 2011’s “Blood Magick Necromance” was recorded in part at Mana Recording Studios in St. Petersburg, Florida with producer Erik Rutan (HATE ETERNAL, MORBID ANGEL, CANNIBAL CORPSE).
Commented BELPHEGOR founding member, guitarist and vocalist Helmuth Lehner: “Drums, bass and guitars are all tracked. It sounds brutal, more aggressive and more death than what was heard on the last LPs. The soundwall is massive — just as expected. Thanks to Erik Rutan for the extra motivation and forcing us to nail down tight-as-fukk performances. Furthermore, I am set to lay down the vocals in June/July, the mixdown and mastering will be done in September.
“A tough call, but it was the best for the record to decide to delay the release date again, to unleash the album in early 2014.
“Be prepared for Diabolical Death Musick!”