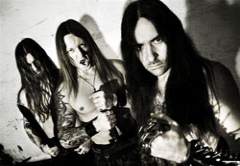 The following message was read on the band´s official page:

All right, last days before we hit the studios. We’re all set, most of the 10 compositions/arrangements are finished in a rudimentary form. Equipment is packed, new cymbals arrived and cables/strings/plecs a.o.have been fixed. Andy Classen (Stage One Studios / Kassel Germany) will be at the helm as producer, the four recording sessions and mixing/mastering process should be complete by middle of February ´06, and the yet untitled album’s release date will hopefully be sometime in April/May of 2006.

As for the new album, we are doing everything we can to make sure it’s the heaviest, most intense – monumental one BELPHEGOR ever made. We never rehearsed as often as for these 10 sound-collages, hell yeah,…..we feel that this will be the mightiest BELPHEGOR jewel yet. Well, we will let you in on the progress being made and give you an insight into the recording processes, reports will be posted on this site on a regular basis…