German Sludge/Groove Metal gents BEISSERT have revealed a new song in their repertoire as well as details of their 3rd in career album. The release entitled “Darkness Devil Death” will invade the shops on the 12th of March in Europe and 30th of April in North America on Agonia Records. Première track off the album can be streamed below.

BEISSERT is a wild crossover between Rock, Sludge, Groove and Heavy Metal, led by memorable and characteristic vocals by BSSRT. The new album is recommended for fans of Mike Patton, Fantomas, Cluth, High On Fire, Pantera and Nevermore.
“Darkness Devil Death” was recorded and mixed at Kohlekeller Studio by Kristian Kohlmannslehner (Burden, Crematory, Powerwol f, Ava Inferi) and will feature a guest appearance of Thor Sten from Burden. 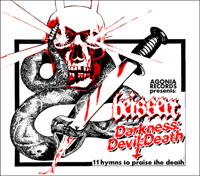