Hi! What`s up? Are you ready for a confession haha?
Yep, we’re ready to spill the beans!

First of all I would like to ask why did you choose a metalcore for your form of expression? Is this a favourite genre of all members of band? What is the best side of this music for you?
We express ourselves through metalcore because it is a style of music that can be very dynamic and diverse. Of course, we all do listen to some good metalcore, but it’s hard to say what our favourite genre is since it is really hard to define a genre nowadays. We listen to everything from hardcore to metal, from rap to electronic music, from jazz to funk. The best side of metalcore is certainly the energy. We want to let off steam, which is why this genre is ideal for us. It is just as crazy as we are.

You released a new album named „Dharma”. Could you tell something about the process of making it? Where did you record this stuff?
We recorded “Dharma” at Massacre Studio in Obergnas, Austria with Albert-Mario Lampel. It took us about one year and a half to write the album just as we wanted it. One of the main goals was to write 12 tracks that form one unity, but that still sound different from each other. We think we did quite well since all the people we’ve asked so far have different favourite songs. 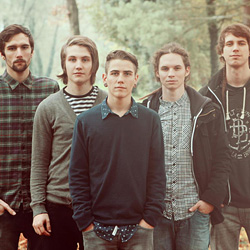 Dharma is the Law that "upholds, supports or maintains the regulatory order of the universe”. It`s a religious term. Could you tell something about your attitude to religion? Why did you name your album this way and what is the general lyrical concept?
You got that right. Gregor (our Ex-vocalist) took the term Dharma from Buddhism. Religion can be a good thing if it doesn’t hurt others, which unfortunately is the problem very often nowadays. However, we are not a religious band and we won’t preach to anyone what to believe and who to follow. If you choose to follow Christian or Muslim or whichever ideals, fine, do so, but don’t discriminate against others. We chose the term “Dharma” because we wanted a name that would describe the lyrics of the album best. We wanted one word that would hit the nail on the head.
The lyrics of the album describe the life of a young protagonist who decides to leave his family and his life behind in order to see the world. On his travels, he gains many experiences and also realizes that suffering is an important part of life; that suffering is a teacher. The whole album is thus the spiritual journey of a human being.

Do you think the lyrics and song-titles are a central part of the music? A lot of bands seem not to spend much time on coming up with good lyrics/song-titles.
There is no central part to music. Everything about music is central. Lyrics are just as important as the instrumental part. Music can easily be ruined by bad lyrics or bad composition.

I see that your lyrics are mainly about the „ will of life”. What do you think, in what people nowadays should put the faith?
Put faith in something that makes you stronger, in the people you love, in the things that make your life worth living. Everyone should decide for themselves what is important to them.

You’re signed to 10th Legion Records. How did you end up with them?
We knew Trevor before he even created 10th legion Records from thepit.fm, a great Australian online radio station. We sent him our album, he liked it and we decided to work together. There was never any doubt in Trev, that’s why our decision was an easy one. You don’t find such dedicated, hardworking, nice guys nowadays anymore. We were really lucky.

You wrote on facebook that playing in a band is connected mainly with touring, hanging out, having fun, meeting new people. Touring is the brightest side of playing band for you? Is this correct and if yes could you explain why that is?
Everything is included in touring… we’re hanging out with each other, we’re having fun on roadtrips and gigs, we’re sharing our music and energy with the people, we’re making many new great friends and we’re seeing lots of awesome new places.

What countries are on your list to play live?
We just returned from a Slovenia – Hungary – Serbia – Bosnia tour. The next stop will be Vienna, Austria on October, 6th. After that, we’ll see. Hopefully, we get to see the rest of Europe soon. 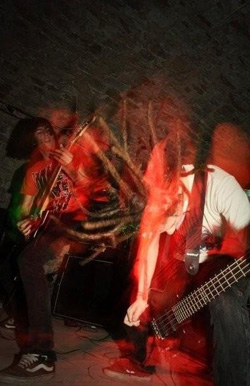 What is the best situation you’ve experienced while on tour?
That’s a difficult question because every moment of touring is special. The best moments, however, are those 40 or 50 minutes on stage!

When you’re not touring and playing music what do you then do for a living?
Some of us are working while others are doing their studies. It impossible to live off our music yet.

Could you tell something about the slovenian scene? Which bands could you recommend?
The problem of the Slovenian scene is jealousy. Instead of sticking together, everyone is just begrudging each other. This is why Slovenian bands can’t really blossom. However, in the last few years, we have made friends with many cool bands.
You should all check out Silence Before, Hand In Mine, Trash Candy, Soundtopia, Splitting The Sky, Frame, Pissing In The Wind, Home Outgrown, Heretic, Last Day Here, Insane, Skeebeep,

What’d be the lineup of your ideal ‘supergroup’ (of course, you can have either living, dead or undead musicians among the ranks)?
Each of us chose a name that first crossed our minds and this is what came out: Mike Patton (Faith No More) on vocals, Thomas Williams (Stray From The Path) and Tom Searle (Architects) on guitars, Jeremy Davis (Paramore) on bass and Matt Greiner (August Burns Red) on Drums. Looks like a rad combination!

What are your goals from now on?
We’re planning to release two more songs and videos, to write a second album and to travel Europe and hopefully the rest of the world.

Thanx a lot for your time! Last words are yours!
Thank you a lot for making this interview possible. We enjoyed the questions a lot;) we hope that we will come to Poland soon.