Polish technical death metallers Banisher released the first single from the recently recorded “Scarcity” album. The follower of 2010’s  “Slaughterhouse” contains 10 tracks, including a death metal version of “Yakety Sax”, more commonly known as the “Benny Hill” theme. The band is looking for a label to release the album.
Listen to the new single below:

The album was recorded in a new line-up, with Łukasz “Lucass” Krzesiewicz (Sammath Naur,  Gnida, Esquarial) as the drummer. Furthermore, there is a guest appearance by Wojtek Famielec (Disperse, ex-Redemptor), who recorded the bass guitar for one of the tracks. Szymon Grodzki from Invent Sound Studio (also Sammath Naur and Gnida guitarist) took care of the recording, mixing and mastering.

In the meantime, the band is preparing for the upcoming concerts. In April you’ll be able to see them live in 6 cities, as part of the “Ultimate Porky Tour 2013”. Several more shows in Poland abroad are planned for May. In August, Banisher will appear on two outdoor festivals in the Eastern Europe: Metal Crowd Festival (Belarus) and Metal Head’s Mission (Ukraine). 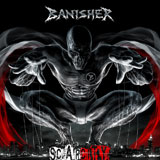 Armor Column - With Blood And Vengeance