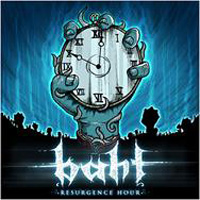 After their 5 song length and in Turkish album “Bilincten Derine”, Baht has released a new promo album called “Resurgence Hour”.

“Resurgence Hour” includes 2 songs with the total time 15:16, which have been recorded in Ankara, Midas’in Kulakligi Studios. Drum tracks has been played by Joona Räsänen from Finland.

With their all in Turkish album “Bilincten Derine”, Baht has gained attention in Turkish underground metal scene and now, the band wants to renew their image with Resurgence Hour. From now on, Baht will continue with the songs both in Turkish and English.

Check out Baht’s songs on thier Myspace page.
www.myspace.com/bahttr – www.baht-tr.com