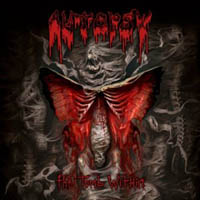 Got together on last year, Autopsy have a new ep called ‘The Tomb Within’. Recorded on September in the Fantasy Studios with Adam Munoz  and reunited trio Chris Reifert, Danny Coralles and Eric Cutler with bass player Joe Trevisano(ex-Abscess). For almost a decade its going to be the first ep and its going be on the Peaceville Records webstore on 13th September and will be released later this fall. And about the cover art, the cover made by fantasy horror artist Matt Cavotta.