Greetings Tristessa, it is a long time since Astarte brought out a new album but the wait came finally to an end. What can you tell me about the new album?
Our new album (6th albums) is called BLACKDEMONIUM and it is about to be released in the first months of 2014. Rights now we are making the recordings. The album makes the real step forward for the band; it is Black Death metal with some strong essence of Thrash passages. There is a lot of anger in this album and I would say that we are talking for the most brutal album until today. We needed that kind of return back because after those years of release there were many things suppressed and many things have been changed in our society and this brutality was something that came up.

Could you tell us a bit more about the lyrics of the new album and what they are about?
We are concentrated to the today reality on society and human wrath. We deny things we resist to live in misery of the fake world. How we live, how we can escape and react. Also I always dedicate my songs to the Ancient Gods and History, I speak for the God of Sun and more… The song BLACKDEMONIUM describes how the real world is right now. There is another song speaks of werewolves… and many other issues 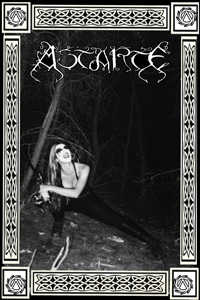 Astarte also got a line up change during this time. Could you introduce your new band members, and also; are they full band members or just for the recording?
It is me on vocals, Nicolas Sic additional vox, Dimitris Harisis on bass/guitars and Ice on drums. Nicolas and Ice are full band members.

How much are they involved into the composing and writing the lyrics for the new album?
Nicolas Sic is full involved into musical and lyrical compositions as he is my left hand into making the whole process, we share all music ideas and all work behind this album is made by the two of us. .

Did they give a new touch to the music of Astarte? I am asking this because I read somewhere that the new album will also have some Thrash Metal elements in it.
As I previously mentioned in the album, there are Thrash elements, but this has to do with me because I always had into the music of Astarte Thrash elements. Thrash always is into my mind when I compose music.

Will you have again some guest musicians on your new album like you had in the past?
There are some movements and some thoughts for a person/musician that I listen and he is in my top band but right now we are still making the recordings and nothing is for sure. I hope I will have this opportunity to have this man into my new album. 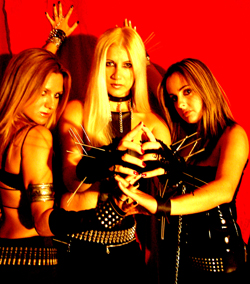 Since Astarte brought out their last album “Demonized” you were also busy in some other bands/projects. Could you speak about them and did they influence you?
Yes I put my effort with Nicolas Sic to reformation of LLOTH band. We found new members and we work on new songs. We made some lives. Also there is the band Insected where we released a promo CD “Killing for recreation” and we played Brutal Death. My influences for Astarte are from different sources.

Are you planning maybe to record a new video for one of the songs from the album and if so, for which track will it be?
Yes I manage to make a new video clip to support the new release and we are still discussing the concept and the song which we will make.

Is there any chance that Astarte will play a concert in future or maybe even go on tour?
Right now we are totally concentrated to finish the recording and mix/mastering. We have no plans for a concert or for touring. But still there are lots of proposals and I hope to make something in the future. 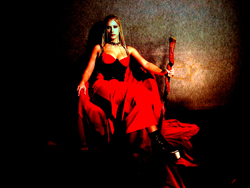 The Greece BM Scene has some kind of Cult status in the BM Scene worldwide. Bands like Necromantia, Varathorn and some other are active for around 20 years and the have influenced the BM style a lot. On the other side, there are new bands like Aenaon and some others that are slowly breaking through. What makes the Greek BM Scene so interesting in your opinion?
Greece has a lot bands and many of them are good enough. But how can a Greek band open its wings and make future plans when there is nothing here to support, no Labels no organized music industry to make these bands move on. So, for a band to survive must go abroad and start from zero because Greece is far away for all this system and from touring things. Things are very difficult to leave jobs and responsibilities behind and go abroad for this risk. We are away from the core countries and from this system. Only a few bands here have make steps abroad, have worked alone and have make huge risks to succeed.

Any last words for our readers at this time?
It was a real pleasure to be invited and I really thank you for this. I need to thank all the readers who support our work and I will make my best to pay this back with our new album. BLACKDEMONIUM will make a new start for Astarte.

PHIDION - Flesh of the Forsaken