Swedish extreme death metallers AS YOU DROWN have announced Rat King as the title of their upcoming sophomore album to be released in October worldwide via Metal Blade Records. The successor to the band’s 2009 debut Reflection, Rat King was recorded at the band’s own AYD Studio in Borås and was mixed and mastered by Plec (WATAIN, SCAR SYMMETRY, MISERATION) at Panic Room Studio in Skövde in July 2011. 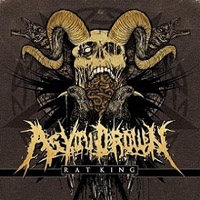