ARMA GATHAS will release its debut album, “Dead To This World”, on April 27 (one day earlier internationally) via Metal Blade Records. The CD was recorded in November 2009 at the Barracs studios with producer Sky Hoff, who has previously worked with CALIBAN. The mastering was handled by Alan Douches at the West West Side Studio in New York. 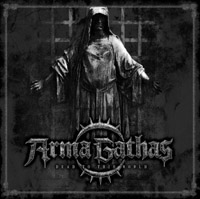 The song “New Savior” is now available for streaming at:
www.myspace.com/armagathas