Arallu was founded in late of 90’s and is still going on, what was you aimed to create this band ? I mean Arallu is not typical band ,has owned it’s sound ,could you tell us foundation process and now on?
Hello from Jerusalem.Arallu was founded Jerusalem in the middle of the conflict between the religions around the old city of Jerusalem in the 90′. When you live as the terror is surrounding you, if you want or not,its inspired you whatever you do.I remember the bus exploding next to me and the hatred comes through the Tv news. I was 16 years old and the extremely black metal concept around Europe comes to my life mixed with bloodshed around Jerusalem what bring Arallu band to get birth.. 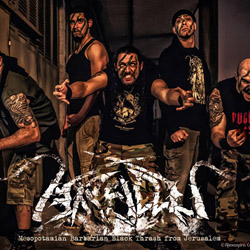 5th studio album Geniewar just released in this year,could you tell us expectation of this album and feedbacks from audience?
GENIEWAR getting a good feedbacks for now and we hope to continue.Like every Arallu albums the music is not Sweeping u ears directly. Its taking time. like the old black metal albums of the 90’s .you have to give it a chance and listen carefully. Who will listen to GENIEWAR carefully will really like it.I believe, like the other albums, people will understanding the main idea of GENIEWAR after few listening. I really want to believe GENIEWAR will open us a new doors and will take us to a new way that we never knew….

If i am wrong please correct me ,last year Arallu played in Canakkale Turkey in Persian Metal fest or something like that,how was the reactions to Arallu? Canakkale has not any metal scene in Turkey as much as we know ,is it weird to play without big audience like Istanbul/Ankara?
Canakkale was a great experience for us to play. We meet a great people and great metal heads from Lebanon, Iran, Dubai and of curse Turkey. This is the place to thank Meraj from M.O.P that invited us to joined this metal fest for the first time in Turkey, and its will be honor for us to come back and play in other cities. Some friends told me u have a great metal scene in Istanbul and I’m really hope to come see it.

What do you think about Absu(not from middle east but they has lyrics about mesopotamia), Melechesh, Orphaned Land ? Do you think Arallu follows that mentality or has own sound/lyrical concept or both?
I’m big fan of ABSU I have all discography of this band. I relay like the idea behind the music of ABSU.Arallu it’s not a new band we are from this stream of Middle Eastern black metal,and its great. like the Norwegian black metal have they own sound, in the Middle Eastern metal bands have the own sound and style also.

In the last years,middle east has been troubled with terrorist acts and territory is on fire like never happened before ,what do you think about middle eastern situlation; immigration,terrorism,despotism,sheria laws, Israel-Palestina war,Syria,Iraq, Turkish policital chaotic and despotic atmosphere,could you comment about middle eastern situlation lately?
Unfortunately you so right. in our second album “SATANIC WAR IN JERUSALEM” from 2002 I’m talking about that . We have a Hebrew line in the middle of the song “JEWISH DEVIL” translates as “satanic war in Jerusalem will start in Jerusalem and spread the world. We (Arallu) know this war and the idea behind the terror and warn you for next”. Today we 13 years after these words and look around u in Europe and of course the Middle East the terror is attack every corner. The global terror is surrounding. When people afraid his usually looks for God and his religion. U can see it the Muslims, Jews and soon we will see it in the Christians religion stream. That’s exactly what the extremes of the religions looking for. 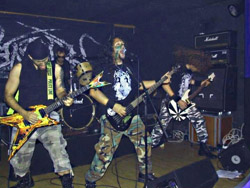 Could you tell about Israeli metal scene;?,and have you ever face to any troubles for being a Israeli band in abroad and in Israeli too ? ( you know not many people love Israel and Middle Eastern countries)
This is bulshit. We travel and preform in Austria, Germany, Switzerland, Hungary and of course Turkey.all knew from where we comes for. We met a great people from Iran and Lebanon also we felt nothing about hatred for Israel or Israeli people I think what we watch on News stay in news. We talking about small groups around the world that receive a huge spot in prime time.

Thanks for your time,what do you want to tell our readers?
Thank u very much for this interview we discover the metal heads in Turkey our last show and we hope to come again to preform your great scene.