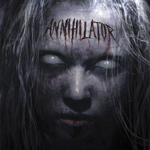 Canadian band Annihilator’s 13th album ‘Annihilator’ is coming from Earache Records on May 17 in Europe. The frontman of the band Jeff Waters explained that the artwork of the album is belong to Gyula Havancsak like the last 4 ones. Jeff said that ‘The consept was mine, just like a nightmare I thought like Alice (Alice In Hell) is coming out from her grave’.