I’m happy to meet somebody from North of my country. How is going on Ukraine? I’ve heard that there is a nice country and alcohol is cheaper than here…
Marina: Greetings! In Ukraine live differently. On the one hand it is a country of incessant political crises, on the other it’s the heart of Kievan Rus’ and the cradle of the Slavic peoples, and vodka – is part of our ancient cultural heritage %) 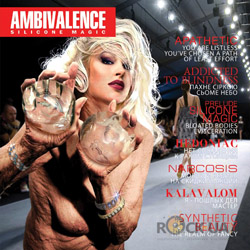 First, I want to talk about your "Silicone Magic" albums great cover. Really it’s successfully and interesting. I think it’s related to your "Silicone Magic" song. Who give this idea, how does it has a story?
The author of the cover art is my husband, he takes active part in the life of the group. The idea to consider more close a theme of plastic surgery and manipulation of mass consciousness by means of advertisement ripened at us for a long time and soared, so to say, in the air)

Some songs are Ukrainian, some are English, what is the reason of that?
We even have songs in Russian) English is the international language of rock music, in Ukrainian we write from the principled motivations, and in Russian, which, say, for me is the mother tongue, to my mind sometimes come ready-made texts and it is simply a pity to me to translate into English successful rhymes and the text sizes.

I think your album is successful, but I’m curious about that… In my opinion, your songs are in taste of more fun grind core band rather than killer brutal death metal bands. Do you have a specific route regarding with genre or what do you want to do it?
We do not try to artificially drive ourselves into the frameworks of a certain style, the music turns us on its own, under inspiration, and each album differs from the previous one. Someone sees in our music progressive, someone sees grind, we try not to give clear definitions of our style, we simply embody our musical ideas. 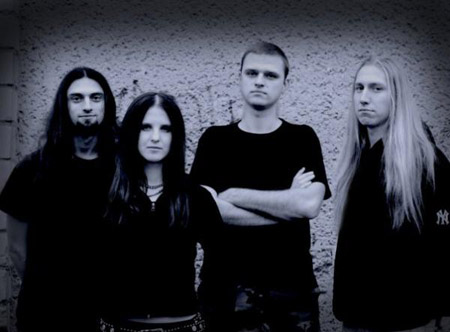 Your website is Ukrainian, I tried to translate it by Google translate, but it failed, I don’t understand anything, can you talk about your band?
The band was founded in the year 2001. Since that time it was issued three albums: "The Splinters" – in 2003, "Pornomechanoid" – in 2006 and "Silicone Magic" – in 2010, played the great number of gigs at local shows and large festivals. We have acted on one stage with VADER, PUNGENT STENCH, NEOLITH, HATE, DEAD INFECTION, NOCTURNAL MORTUM, PARRICIDE, CEREBRAL TURBULENCE, ESQUARIAL and lots of other bands from a variety of countries. 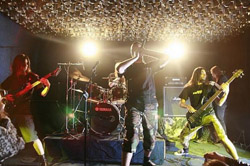 You were in your tour on February (2010), how was it? What do you think about abroad concerts, tours? Do you have plans for Europe, America, maybe Asia?
February’s tour across Ukraine was wonderful, we have traveled even the most remote corners of our homeland and brought a holiday to fans of brutal sounds) Actually we love live shows, we love touring. However, repeatedly having traveled all Ukraine, we didn’t get out yet abroad and would like to do this in the future necessarily. We with pleasure will consider such possibility.

I think you take heed of women’s beauty obsessions when they overdo like that stuffs. What do you think about this situation exactly?
There is the problem of manipulating the mass consciousness by means of advertizing in mass media, a kind of coding, the transformation of a person into mindless consumer, abstract from the development of his personality to the problems of the imaginary demonstrative status and unnatural contrived standards of beauty. We would like to mock once again at devotees of glamour and gloss, inevitably aging old bags with all strength trying to reshape as the worn-out clothes and intravital mummify their flabby carcasses in last attempt to sell more expensively their stale goods. We tried to accentuate that the modern beauty in its aspects is not less brutal than our music and is not a natural masterpiece but the result of work of the butchers of Aesthetic Surgery) 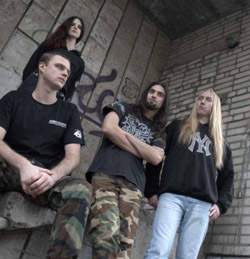 There are 4 years between your last album and before, how is your new album working?
We have already started working on new material, but to speak about the release of our new album yet too early.

You are filling your 10th year. In this 10 years, how the band’s musical and opinion changes?
The musicians alternated throughout these 10 years, changed the music. However, for the last four years the band stuff has stabilized and does not change. When we were recording our first album in 2003, the musical tastes of the band members were somewhere at the intersection of old school techno death, doom, thrash and black metal. Since then we have grown, our tastes have changed, now in our play-list dominate techno brutal, progressive, grind, and electronic music.

90s, the golden years of death metal, I think after 2000, the golden years for brutal death metal, before you choose this genre, which dinosaurs did you influenced?
Of course, we keened on dinosaurs of the 90’s. For example, I listened spellbound (and still continue) to music of SADIST, SADUS and DEATH. The other members are addicted to works of CANNIBAL CORPSE, TESTAMENT, MEGADEATH, SEPULTURA and many other metal idols of that time. With the coming of 2000’s our musical tastes, of course, changed to a more rough rigid direction.

It’s over, do you want to add something else?
We are always pleased to share our work! Regards to all the local fans of sick extreme music!