Greetings, your new album is out now. Can you tell us a bit more about it?
Cornelius (Drums): „The Boats of the Glen Carrig“ finally has been released in August 2015 by Napalm Records.
It was recorded around easter time 2015 at RAMA studios, Mannheim. Recorded, mixed and mastered (vinyl) by Jens Siefert. The CD version was mastered by Roland Wiegener, Tonmeisterei Oldenburg.
In my opinion it is darker and heavier than our previous album „the Giant“. The sound is better, especially guitars are way more in your face. 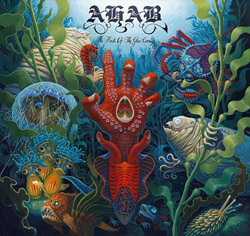 Can you tell us a bit about the composing process for your new album and also about the recording of it?
This time we wrote every single song as the four of us, standing in our rehearsal space. There are some songs on „the Giant“ Daniel wrote on his own at home. This time only basic ideas were developed at home, but composing happened as a band, solely. It took us quite a time until everyone in the band was satisfied with each song.
Sometimes it was really hard to content everybody and it took us some long discussions, some fights, but I would say this was absolutely worth it.
Recording with Jens Siefert at RAMA studios, Mannheim was great, as always. It just became a very stressful process in the end. If you´re not a mainstream act you have to work besides your music, that´s for sure. And spontaneously getting days off for studio cause time is running out is not easy. So it ended up in some night shifts and some 18-hours-sessions. Especially Daniel looked like a walking dead in the end.
But in the end I am more than proud of the result.

Your cover looks very interesting. Who did it and do you think that it fits into the album?
Again Sebastian Jerke who already drew the artwork for „the Giant“ created a wonderful piece of art for us. Of course we think it fits the album. It is Jerkes artwork. And this guy always gets into the right mood by reading our lyrical groundwork and listening to rehearsal recordings in advance.
Hector had that great idea of making it so extremely colorful. It depicts a place which is not mentioned in the story but a very important one. Most of those creatures you can see somehow appear in the story. 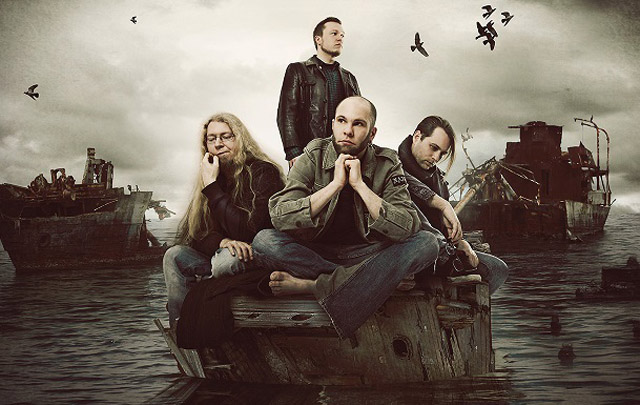 Can you tell us a bit more about the album since it is based on a novel and I don't know how many of our readers have read the book?
The lyrical groundwork for our fourth album „The Boats of the Glen Carrig“ is a horror novel, „the Boats of the Glen Carrig“ by William Hope Hodgson, first published in 1907 . The novel is written in an archaic style, and is presented as a true account, written in 1757, of events occurring earlier. The narrator is a passenger who was traveling on the ship Glen Carrig, which was lost at sea when it struck a hidden rock. The story is about the adventures of the survivors, who escaped the wreck in two lifeboats. Boats is primarily a survival and adventure story with elements of horror, in the form of monsters. In its strong use of concrete detail it evokes a lost world, and is also an interesting case study in human relationships and class mores, as the class distinctions between the narrator and the crew members are broken down by the shared situation they find themselves in. Besides those wonderful elements of maritime horror we found exactly this aspect of the story very interesting. „Doesn´t matter who you are within the elements fierce ire” is a line from the Song „Like red Foam (the great Storm)” wich sums it up perfectly.
The songs chronologically tell the story. For each one we chose „highlights” of the plot. Strongest, most horrific or epic, or just pictorial passages were transformed into lyrics by Christian Hector. 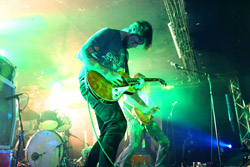 You call your style Nautik/Funeral Doom Metal since your topics are always about the sea and inspired by famous books about the sea. Have you ever thought writing about something else?
That´s avery simple question to answer: No! 🙂

Why is it that the sea inspires your work? What binds you to it?
In the first place images of vast expanse of water, natures powers is the perfect groundwork for dramatic music.
The metaphoric level. Depth…

You all played in different bands before Ahab which have a different style comparing to what you do know. Is the music of Ahab closer to your heart comparing to the music of those bands?
Well, all of us like many different styles of music. I can only speak for myself. The favourite of my bands is always the one I am playing with in the very moment. If it is Death Metal (Dead Eyed Sleeper), D-Beat/Grind (Ekranoplan) or Doom (Ahab). Anything else would not be honest and would therefore make the particular band redundant. But for sure I consider Ahab as my „mainband“ if you like to use this stupid term. But I am too old to play music that doesn´t come straight from my heart. 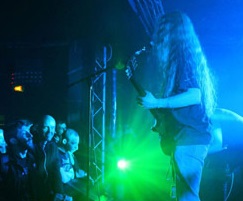 How did you meet and how came it to the idea to make Ahab?
Christian and Daniel have been knowing each other since their childhood. They came up with the idea of writing and recording some doom music. That actually is what formed the base for Ahab. Just play some doom…

Ahab was the captain of the whale hunter boat that was hunting Moby Dick. Is there a deeper meaning for you that you decided to use his name as your bands name?
I think it was Hector who came up with the name. I cannot say which deeper intention he had. But for me this name is the most perfect name ever for a doom band. A human being trapped in the tragedy of his own miserable life. Driven by senseless hate Ahab made the hunt for a white whale the sense of his life. Miserably he goes down in the end, a tiny human being facing the powers of nature. This is so very human and dramatic, isn´t it???

Are you thinking about making a video for one of your songs?
Well, we have… We made a professional videoclip for „Like red Foam (the Great Storm). A controversial one, which may not fit Ahab´s lyrical and emotional world in the opinions of some people.
Our bassplayer Steophan also cut a very cool studio clip for the opener of the album, „the Isle“. 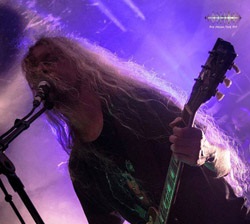 You are soon about to go on tour? Are you exited about it and do you love to play live?
We have just been back for one week now. This is also ther reason why this interview is a little late.
All I can say is, it was a blast. In Mammoth Storm and High Fighter we found wonderful people we shared a terrific time with.
Playing live and being on the road… that´s what it is about in the end, I guess… A lucky one, who can share this experience with such magnificent characters…

Is there maybe a special town or country that you are about to play there or would love to play there?
In the end everywhere in the world, where you meet great people, have a decent sound an just a good time. For real, I am interested in playing everywhere…

Any last words for our readers?
Open up your minds. Hatred always is an expression of weakness for it is the easiest way. It is for the dumb and therefore can never be the answer.
Doom on in peace!