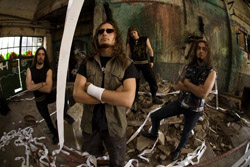 Hi to all! Aggression seems to be consisted of members who really love thrash metal and really adopt it. I personally see a resemblance between your vocal’s sound and Paul Baloff’s (Exodus). So, in your music, one can see the effects of new generation of thrash metal. How do you define your interactions?
Oscar Reka: Hi and thank you all for your support!! Well, this is a bit complicated…, we all listen to thrash metal, new and old, this no matters if the spirit is the same, but we play with all metal influences we have, this includes thrash and every style of metal, death, groove, progressive… and we work very hard trying to do an exiting mix of all in an personal thrash style.

Your members have been together since the band’s foundation. How do you manage that while a lot of bands are experiencing member changing frequently? Do you think that you are close enough in terms of friendship?
My answer is absolutely yes, but our bassplayer Sergio Soto have left the band the last month, not for problems of friendship, is his decision, but we have something in mind: before musicians and a band, first we are very good friends, we have to, we are playing and spending a lots of time together so we have to meet all people involved in the band to do things well done.

What bands the members of the band admire?
I (Oscar Reka) admire all good guitarists out there, thrash or not, Joe Satriani, Gary Holt, Jeff Loomis, Steve vai, Aleix Laiho… Pol is a die hard fan of Nevermore and Kiko Loureiro, and Sergio admires the blast off drumers out there like George Kollias, the band The Faceless… 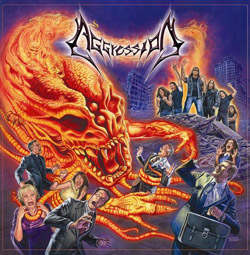 How did your agreement with Xtreem Music develop? Can you give some information about that? Will you continue to work with them?
The contact had place after a gig we’ve done with the Death metal Spanish band Avulsed, the singer (Dave Rotten) come to us after the gig and tell us that when we have something recorder we can send him a copy and he will return us a contract. That was a very good notice! and yes we will edit our second album with them (terms of contract) and so on…we will see…

The cover of Moshpirit is a meaningful one, I think it gives a message to the society, to the rich, to the government and metalheads from different perspectives. I like it very much and we know that it was done by Ed Repka. What can you say about it?
I’m totally agree with you, that is what it has supposed to be, we are very grateful to Ed, he has done a very good cover.

What subjects Aggression talks about in their lyrics?
War, corruption, politics, justice,,, We talk about everything that enrages us, this world sucks, and we talk about that trying to do a hope message “Don´t like the world, and you can´t change it so…destroy it”

How are the concerts going? Is there any tour?
From the release of Moshpirit till the ending of this year, we’ve been touring through all Spain, and now we are working hard to do a European tour soon, but it’s very early to confirm anything. Keep watching our news!

Moshpirit is a very good album, lots of critics and fans of extreme metal really praised it. It must be very proud of you. Do you think any changing in this genre or will you continue with it?
Sure the spirit will remain, but the new songs we are preparing will be more technic, and faster…and full of rage. We have found our own style in doing thrash metal. 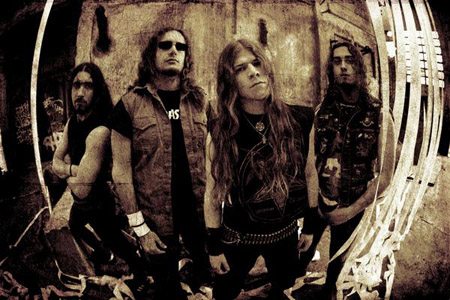 What can you say about Oscar’s playing in a pagan black metal band? Is there any genre that your members engage in personally?
No, all members of Aggression are focused on Aggression, I had to leave Lux Divina because Aggression requires 100%. I was very busy with Aggression to keep working with Lux Divina.

Xtreem Music is a company that pays importance to local bands. Will we see you frequently in international tours? Does David support you in this term? It was announced that you would be playing in Play It Loud in Italy on 30th October, how did they contact you, is this the first time you play in an international organisation?
For the first question I say: I hope so!!, for the second, I think that David is very busy with Xtreem Music and Avulsed to worry about Aggression dates. This is not his business at all.
We played a gig in Barcelona with National Suicide, from Italy, and their label contact us to play in that festival and so on!! This is not the first time we play outside of Spain, but we are very exited with that, because we will meet and share stage with bands like Mekong Delta, Destruction, Agent Steel, Diamond Head, etc. 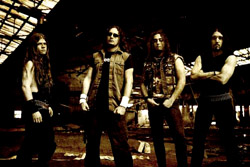 The news on your official myspace are generally published in Spanish. I think you usually pay attention to Spanish metal market, what are the reactions towards it from abroad?
I think awesome is the word, we never think that people in Russia or Germany or Thailand or Turkey will listen to our music but… thanks of the internet, people from all around the world send us mails describing how they love our material, and that´s a think that astonishes us.

What studio did you use for album, and what equipments did you have to create it?
We used a basement converted into studio, full of cockroaches!!! was in the Ax studio, based in the center of Barcelona, and we used an Engl Powerball for guitars… but all the merit of the sound is from the young masterer Erik Monsonis, did a really good work!

A typical question of us.. Did you experince anything silly during your concerts? For example your tour bus was broke down, one threw you a beer can on the stage etc?
Yes!! obviously every gig is an experience full of silly moments!!, in a gig with the Japan band Sabbat, a photographer unplugged my amphead when I was starting a song, another day with the stage diving maniacs on stage they break some guitar pedals, on an other gig Sergio throwed some drum cymbals out during playing, we made a knot with our jacks… and so on!! but we laugh plenty remembering that!! 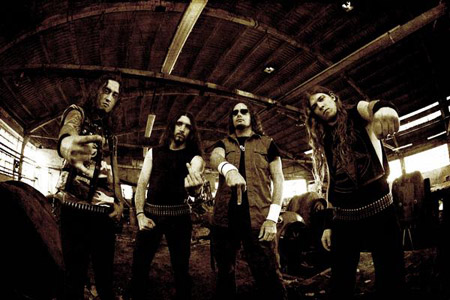 Spain has very good bands, we know that. Do you have any friends from other Spanish bands? Or any name you would like to recommend us?
Absolutely!!! Angelus Apatrida, Redimoni, Wormed, Crysys, Hybrid, Rancor, Decapitated Christ and Legen Beltza are some bands with very good Stuff and some of they friends of us. 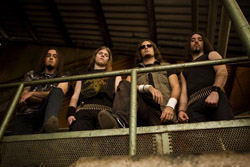 Lastly, I would like to ask a question out of music. I don’t know whether you are engaged in it or not, The World Cup is being played currently and Spain lost its first match. Will they manage to reach the final? If you watch the matches, what can you say about vuvuzella. Horrifying, isn’t it?
We all like football, but we are not really interested in it, I don´t mind if Spain win or loose, but watching the matches of the world cup It´s turning a weird situation with all this vuvuzellas bothering all match long…it´s really disturbing.

Thanks for your answers! Is there anything you want to say to Extreminal or thrash metal fans? Please feel free to do so.
Yeah! Thanks for your support!!
Keep watching Aggression’s myspace for news:
www.myspace.com/aggressionband

Thank you to Nuklear Terrorist who is helping for questions.