Aflliction Gate are four hairy Frenchmen peddling an uncompromising brand of bludgeoning Death Metal. Now their discography might not be that long (it’s only been a four song EP so far) and their sound isn’t everyone’s cup of tea, but for those who love Death Metal done old school, Affliction Gate are an aural buttered croissant to brighten your day. Think that sounded stupid ? You ain’t seen nothing yet. Here’s guitarist Grief keeping Extreminal.com’s most irreverent scribe up to date about gigs, recording studios, and having sex in metal festivals.

Bonjour Affliction Gate, which member of the band will I have the pleasure of interviewing?
Grief: Hello Miguel. It’s Grief, rhythm guitar and composer of all music, here. 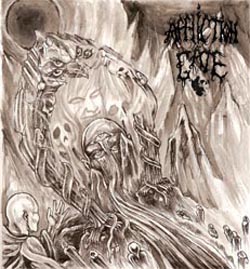 Quick, tell the world about your last EP, “Severance”. What kind of reception did it enjoy from the fans and press?
I’m glad to say the feedback from people in the underground scene all around the world has been fucking good. It ranges from positive to excellent so we definitively can’t complain. We didn’t expect to have such a killer feedback and reviews for a debut release. It’s really encouraging and satisfying. By the way, the French underground label Forgotten Wisdom will officially release our EP on CD format for late December. You can check out their site here: www.forgottenwisdomprod.fr.st

Where did you find the studio and the budget to bring “Severance” to life?
The truth is, it was our long time friend Wayne (from Thrash Metal band Hungry Johnny) who took care of the recording so it was a home made affair done in the old way using an 8-track recorder. The result is unpolished and raw-sounding while drums were recorded live without either “click” or trigged shit. Which was just the way we wanted this EP to be!

So when’s the next chapter of your discography going to be written? Is the band at work on anything new at the moment?
Yes, we are already working on five new songs. The next step will be to record a debut album probably during 2009.

Does it take long for the band to come up with a new song or are you all a spontaneous bunch of Frenchmen?
Well, it depends. Sometimes it comes quite naturally and easy and sometimes it’s a real pain in the ass to complete a song with the right riffs or a good structure!

Let’s delve into the band’s history. When was Affliction Gate born? Who met whom? And is your name connected with the popular clothing brand that sponsors mixed martial arts tournaments?
Affliction Gate was born in the spring of 2006. Our vocalist, Herostratos, and drummer, JP, were old friends who’ve known each other for several years prior to the band forming. Then we decided to give birth to this band to play old school Death Metal like it used to be in the late 80’s – early 90’s scene, thus taking inspiration from the masterpieces of that era such as Asphyx, Unleashed, Grave, Benediction, Bolt Thrower, Cancer, Morgoth, Massacre, Mantas, and Death. Damien joined us one year later as lead guitarist and finally, after searching for a bass player for two years now, Viv entered the band very recently. However, we had to part ways with Damien a couple of days ago because his job takes him lot of time so, he can’t be involved with us at 100%. It’s Viv who plays lead guitar now. Honestly, we were not aware that a clothing brand dealing with metal and sports was called “Affliction” until you told us about it. As you can imagine, it had no influence on our choice for a name and, anyway, we don’t share exactly the same. For us, the name Affliction Gate means a path of no return & of severance to reach strength and freedom through despair and death, to keep it short. Our vocalist Herostratos came up with the name Affliction Gate being the symbol of our dark perspectives.

What kind of motivation finally pushed you to play in a band? Was it an innate desire to play an instrument? To follow in the footsteps of your idols?
I came to a point where I wanted to be more than a fan. The desire to create my own band became overpowering. There’s no doubt that my motivations were, as you note, to follow in the footsteps of the killer bands I mentioned in my previous answer and to express my love of Death Metal at my humble level. I am not searching for a lifelong career nor making some possible money with my music. It’s only the result of a deep passion, sincere dedication and personal satisfaction over all.

And what about your parents? Are they proud that their kids are playing old school death metal?
Well, I don’t know about the other members but my parents have no problem with it. Anyway, I’m sure they don’t care about Death Metal. Besides, when you are 31 years old, you know, their opinion doesn’t really matter that much compared to when you were only 15 years old! Hahahaha!

Where has the band been rehearsing as of late? Is it in someone’s bedroom? A professional rehearsal space?
No, in fact, we share a rehearsal place with a couple of local bands as well. We pay a reasonable monthly rent. We put our own equipments there and we can rehearse as often and as many hours as we need. It’s the best deal possible. 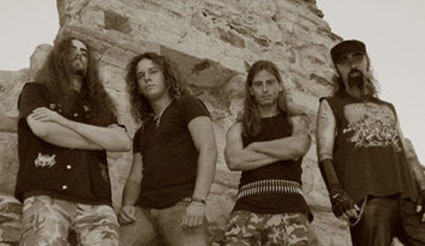 Played a gig recently?
No, we haven’t played live yet. It’s too early for us but we hope to be ready for gigs in Spring 2009. As mentioned earlier, we are working on new tracks at the moment and they will contribute to build a real, longer set list. We also prefer to wait for our EP to come out because it’s still better to play live when you have an official release to offer.

Have you gone to a festival recently? Are you planning to? How many different nationalities do you usually meet in such events? Any wild experiences you’d care to talk about?
Our ex-lead guitarist Damien attended the HellFest here in France this year and there were some cult bands on stage like Morbid Angel, Carcass or At The Gates. Talking about experiences, he told us about having sex with some nice Metal girls that he met there so I guess it was definitely a good Festival for him both musically and sexually! Hahahaha…

Which member of Affliction Gate has the biggest record collection?
As far as I am concerned, I’m quite selective in my own record collection but I think it’s our vocalist Herostratos who has the more stuff at his home. He listens to a lot of different kind of music too (Electro, Metal, Rock, Pop, French singers/artists).

Do you all live in the same city? What’s the quality of life like? How much is a pint of beer? How about a cup of coffee? A croissant?
No, we don’t all live in the same city but we have no problem with very long distances either. France is quite a “rich” country so the quality of life is okay. With all the questions you’re asking me, do you plan to spend a holiday in the south of France or what? Hahaha!

Are the members of the band still in University or do all of you have day jobs?
Yes, we all have jobs but nothing really exciting to mention, though.

Would you mind recommending any good French metal bands aside from Gojira?
For those who are still not familiar with them, I’d recommend some old essential Death Metal bands and their classic albums such as Massacra’s “Enjoy the Violence”, “Abject Offering” from Merciless or Loudblast’s “Disincarnate”. I’m not a fan at all of GOJIRA. Their music is definitely not my cup of tea.

I guess we have to wrap things up here Affliction Gate. It was a pleasure getting to know the band. What will you be doing after this interview?
After this interview I will spend a little time on the computer to check e-mails. Thank you for this cool interview. Your support is really appreciated.