Swedish death metal overlords, AEON, are pleased to unveil the details of their fourth studio offering, Aeons Black. Set to drop via Metal Blade Records on November 20, 2012, the mammoth 15-track Aeons Black was recorded at Empire Studio in Östersund, Sweden, engineered, mixed and mastered by Ronnie Björnström (Garageland Studios) and features cover art by Kristian “Necrolord” Wåhlin (Bathory, At The Gates, Dissection, Emperor et al).
Notes founding guitarist  Zeb Nilsson of their latest offering of irreverence: “This is definitely our most varied albums to date; it has heavier songs yet it also has lots of fast blastbeats and double bass drumming. It’s groovier this time, which I think we lacked on our last album, Path of Fire, which was fast paced almost all the way through. That and the amazing mix by Ronnie Björnström makes me feel pretty confident that this album will appeal to more people than our previous albums. And no, we have not gone softer in any aspect; it’s just easier to catch with all this grooviness. It’s metal right up your ass!”
First single, title track “Aeons Black,” premieres today via the band’s official landing page. Comments guitarist Daniel Dlimi of the tune: “’Aeons Black’ is the first song that I started to work on as we begun writing for this album, and it’s also one of the very last to get finished. My goal was to create a somewhat heavier, odder, not-so-typical ‘AEON’ song. Once happy with the musical arrangement, I handed it over to [vocalist] Tommy [Dahlstöm] to let him write some lyrics and vocal patterns for it. He managed to get it even darker and more eerie. The lyrics are all about how everything living eventually must face the inevitable, which is death. There will be no savior, no heaven nor hell… just a pitch black, silent empty void.”
Tracklist: 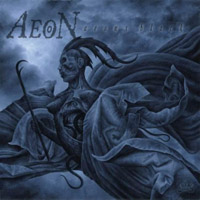