How would you introduce AEGRUS to the listeners and our new readers?
Aegrus is a Finnish black metal band of Satanic visions and devotion formed by myself and Lux Tenebris back in 2005. Our music is raw and dark, yet spiced with melodies of melancholic coldness. Our discography contains various demos, two eps and two full length albums. First full length called “Devotion For The Devil” was released by Drakkar Productions couple years ago and the second one “Thy Numinous Darkness” will be out in October this year through Finnish Saturnal Records.

What would you like to say about your album ? Your first album was released in 2015, what are the inspirational sources of your lyrics in the context of literature?
I can get inspiration for lyrics from quite large and various sources for our songs. Some can occur by reading a book or by simply watching a movie. I also listen hell of a lot of music, so certain things can be received by that way. Misanthropy and especially hatred against religions has a big role in our lyrics, cause humans are simply shit. Always has been, but more and more we’re getting into the future, you start to realize that this is becoming more and more evident and obvious. The current fucked up state of the world proofs it again. But of course I’d say the main inspiration to our lyrics comes from the Satanism, occult and other dark arts that are reflections of my own life and chosen spiritual path while traversing towards the inevitable, Death itself.
Those topics have been part of our lyrical concept since the beginning and nothing has changed in “Thy Numinous Darkness”. This new album also marks an end of an era to us, as this is the last album recorded by Lux Tenebris and I as a duo. The following ones will have a complete line up.

What are the differences between your first album and the recent one, Thy Numinous Darkness?
Well, I’d say that the basic construction pieces are still the same, but they’re put together a bit differently this time around. The songs have more variety than in our debut and the whole atmosphere is somewhat colder and darker. We have faster parts in our song than before, yet at the same time we have more slower and emotional parts. More melancholic parts at that. And the last song of the album is completely instrumental! Something we haven’t done before. Also the production quality differs quite a lot actually, which is clearer than in “Devotion..”, but have more dynamics in it. For example the drums sound much stronger in this album than in any of the previous works. 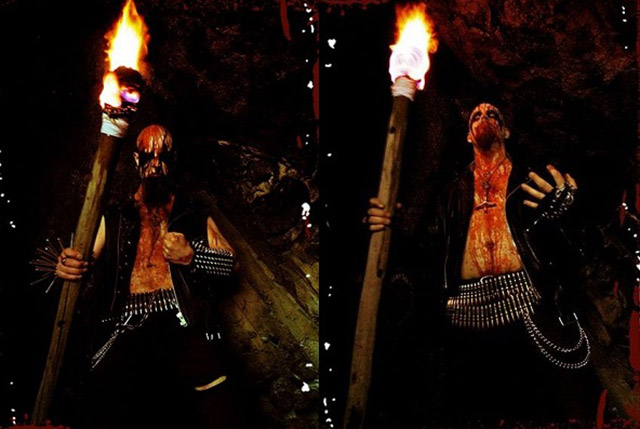 The first album bears certain risks for every band. Following albums can show musical changes. Would you like to comment on this?
That’s true, but the burden to maintain the certain “expected” quality throughout the years after so many albums also can get quite heavy. So basically the risk is always present. If you make the same record twice or even more, you’ll get hate upon you. Then again, by changing things too much, can lead to the same situation as well. Personally I won’t worry such things at all. Always done everything the way I feel is best and why bother to fix something that isn’t broken.

Finland is home of several successful bands and musicians. Do you think there might be a specific reason for this? Does it also influence your music?
Yes, in proportion to our population, we have huge amounts of bands here. I don’t know the possible reason for this, but maybe it has something to do with the Finnish stubbornness and determination. Or perhaps there’s something mysterious in the cold and dark air of Scandinavia. Hah! Don’t really know… Influences have been taken to some extent and of course some may have happened subconsciously as well.

Black Metal contains several ideologies and thought patterns: from mysanthrophy to satanism or deep dark inner realms. What do you think about this plethora of ideas and philosophical approaches in Black Metal ? What is AEGRUS’ stance in the climate of Black Metal?
I think it’s just a good thing that the lyrical themes varies little bit between different bands. That there’s several branching paths and visions within the black metal scene as everyone sees and feels things differently. As a main lyricist in the band I also write different styles of texts depending on what kind of song is at matter and what feelings it raises within me. Sometimes the song just benefits for more straightforward lyrics with hateful and mocking tone on it and other times it requires more personal approach from the depths and deep corners of the inner self. I don’t want to limit how I express myself in just one way, but to summon forth all the dark aspects within me, were they about Satanism, or just pure curses and blasphemies.

To what extent do you reflect mythology into your music?
Not much, unless you count such things as christianity or islam.

Is there anything else you would like to add ? Thank you very much for your time!
Thank you for the interview! Check out our music and especially the new album “Thy Numinous Darkness”! Ave Satanas!

* Thanks to Bataklık Fanzine for this interview.

VINTERSORG To Release 'Till Fjälls Del II' In June