“The Origin Of Disease”, a brand new song from Belgian death metalers ABORTED, can be streamed by clicking here. The track comes off the band’s seventh studio album, “Global Flatline”, which will be released on January 24, 2012 (one day earlier internationally) via Century Media Records.
The CD was recorded, mixed, and mastered by the Jacob Hansen (VOLBEAT, PESTILENCE, HATESPHERE) at Hansen Studios in Ribe, Denmark. The artwork was once again created by Justin Osbournfrom Slasher Design. 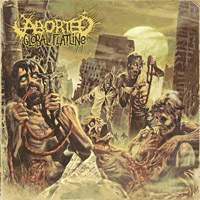