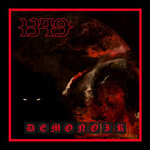 Norway’s 1349 will be releasingtheir new album, Demonoir, on April 27th. The band’s fifth full-lengthalbum will also be their first for Prosthetic Records, who will bereleasing the effort in North America (Indie Recordings will be issuingthe album in Europe). The North American release will be available as adigipack CD and a limited edition 12″ picture discLP.